Home Who We Are History

Siempre Unidos began as the first self-help group for Hondurans living with AIDS in 1999. From its inception, The Rev. Pascual Torres, Chancellor of the Episcopal Diocese of Honduras and an attorney, has served as its Executive Director.  Denise Main, MD, is our co-founder. She and her family met Pascual when visiting Honduras soon after Hurricane Mitch struck. Seeing the heavy toll of AIDS, she determined to match Pascual’s effort with a U.S. response.

Siempre Unidos partnered with the Honduran Ministry of Health in November 2003 and became (and remains) the only nongovernmental program authorized to treat people with HIV in the country. We now run 2 clinics in high prevalence areas, San Pedro Sula and Siguatepeque.

In the 1990s, adult overall prevalence was estimated at 1.7% and was significantly higher among risk groups such as commercial sex workers, men who have sex with men, and the Garifuna (Afro-Caribbean Indian) population. Siempre Unidos has played an important role in helping to decrease the adult prevalence to an estimated 0.5%. Much work remains to do especially among high-risk groups. Siempre Unidos specifically reaches out to these groups, supporting their human rights as well as offering HIV testing and early treatment to help stem the epidemic.

Honduras is one of the poorest countries in the Americas. According to the World Bank, 60% of Hondurans live below the poverty line and 30% live on less than $2/day. It now suffers from extreme violence with the world’s highest murder rate. Honduras is small with a population of 8.5 million. A small organization like ours can have a big impact, especially because Siempre Unidos is willing to reach out to those in most need. The Government of Honduras welcomes our involvement. 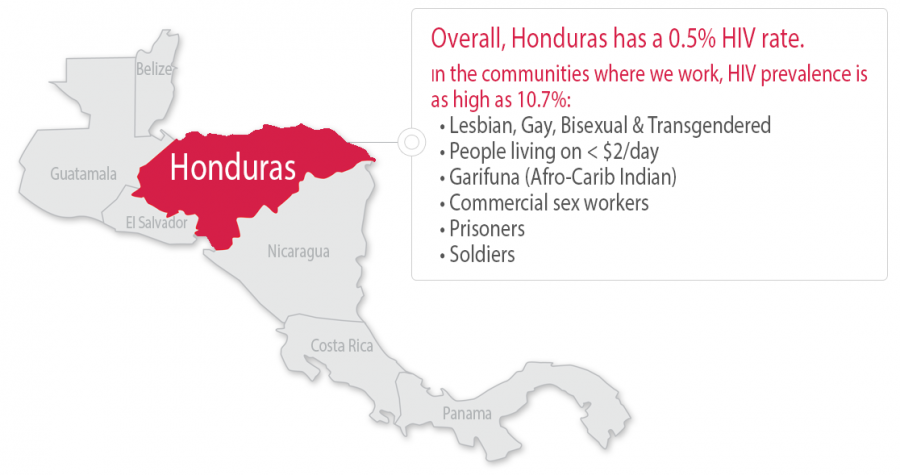 A diagnosis of HIV does not mean death...
it offers new hope.