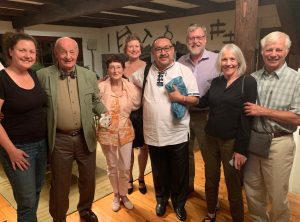 Pascual (in white shirt) surrounded by some of the earliest volunteers and supporters.

A year after Hurricane Mitch left over 20% of Honduras homeless in 1998, Denise and her family traveled to Honduras to see how they could be a part of the humanitarian response.

They met with clinicians, farmers and social workers to learn about how they could best be of service to the Honduran people. By a stroke of luck, they encountered Pascual, who was asked to interpret for the visitors.

Pascual had started Siempre Unidos (“always united”), a care and hospice organization for people who were alone and stigmatized due to their HIV status. In the early 2000s, there were no medications and people suffered terribly.

Soon after, our U.S. nonprofit organization formed to partner with Pascual to build the clinics that now provide high quality and compassionate care to people with HIV.

Thank you to the supporters and friends who ensure life-saving treatment to people in Honduras! It is an honor to mark this anniversary with you!