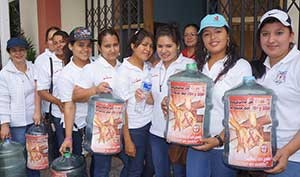 “$33,334.78! Do you know how many lempiras that is?”  Pascual Torres, our Honduran Executive Director, asked the Siempre Unidos Board. He was reporting the amount raised by the clinic staff in 2015 for clinic operations.

The Honduran currency, the lempira, is worth 5 cents.

At the beginning of 2015, Pascual and the staff redoubled a strategy to increase self-sufficiency by launching multiple fundraising campaigns and structuring a sliding fee for general care patients.

In May and June, they held multiple “Gift me a Lempira” campaigns soliciting donations along busy streets, marketplaces, and parks. They made pitches at soccer games and schools. Prisoners in San Pedro Sula heard about their efforts and took a collection. In the fall they held bingo games and churches took up special offerings.

Lempira by lempira, hour by hour, they raised tens of thousands of U.S. dollars. “It feels good,” Pascual told us, “to know we can pay for our own utilities, supplies, and other needs.”

We look forward to 2016 when we will increase HIV testing and treatment by 25%. We are working hard, in Honduras and the U.S., to help end AIDS. Thank you for your support of this work.